Are you looking for some inspiration for your next Dungeons & Dragons bandit encounter? Look no further than these seven bandit leaders, each with their own unique backstory. Each of these bandits has their own motivations and goals, perfect for a roleplaying game like D&D. Get ready to add some flavor to your next game night with these notorious bandits!

A former pirate captain, Marduk is now a bandit leader who preys upon merchant ships up and down the coast. He is a huge, brutish man with a reputation for cruelty, and his crew follows him out of a mixture of fear and respect.

Marduk was born a pirate and he knew it from the moment he took his first steps. He was a born leader, so the moment he was old enough he was given command of a small band of bandits. His crew roamed the seas, plundering and pillaging for years until Marduk’s reputation as a ruthless and fearless captain was known across the realm.

One day, Marduk and his crew stumbled upon a large merchant vessel and decided to take it for themselves. They fought fiercely against the merchant’s crew, eventually overpowering them and claiming the vessel for their own. Marduk then renamed the vessel The Black Dragon and it became their flagship. 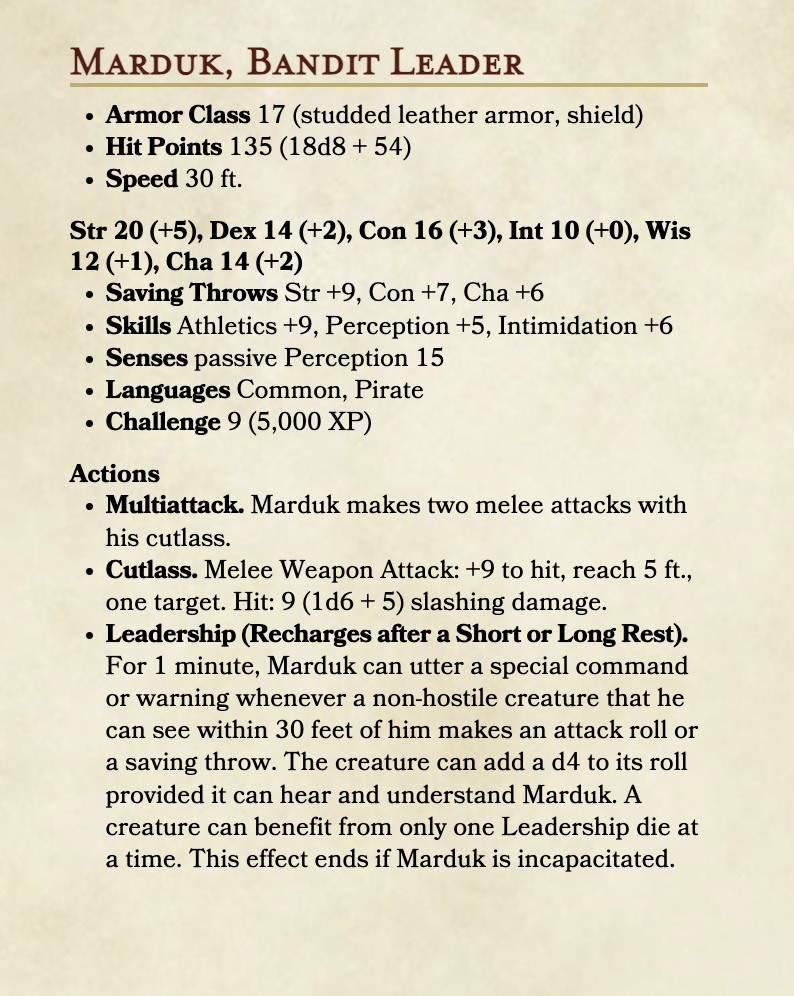 A former soldier in the armies of a powerful kingdom, Gilda now leads a band of bandits who raid small villages and rob travelers on the roads. She is a master of strategy and tactics, and has never been defeated in battle.

Gilda has been able to maintain control of her band of bandits through her mastery of strategy and tactics. She relies on her sharp wit and cunning to outwit her enemies and her enemies usually come out of battle defeated. She is relentless in her pursuit of justice for her people and her commitment to ensuring their safety is unparalleled. Gilda is a force to be reckoned with and her band of bandits have earned a reputation as one of the most formidable and feared forces in the land.

A charismatic con man, Tiberius leads a band of bandits who specialize in extortion and kidnapping. He is a master of disguise and quick–talking, and is rarely seen without a smile on his face.

He is known for his charm and charisma, as well as his ability to talk his way out of any situation. He has been known to work with other criminals and has even been a rival of some of the most notorious bandits of the day. Despite his criminal activities, Tiberius is often seen with a smile on his face and is known to be a charmer among ladies. His crimes have made him a legend in some circles, but have also earned him the ire of many.

A one–eyed giant of a man, Grimwald is a feared bandit leader who preys upon caravans and travelers in the wilderness. He is accompanied by a pack of wolves and wears a hooded cloak that hides his face.

His reputation is known far and wide and his name is whispered in fear by those who travel the wilds. His legend began many years ago when he first began roaming the countryside, robbing travelers of their goods and valuables. He is renowned for his strength and cunning, and many have tried to hunt him down but none have been successful. He remains a mysterious figure, and his origins remain a mystery.

A former mercenary, Helga now leads a band of bandits who specialize in raiding merchant ships and coastal villages. She is a master of stealth tactics and is rarely seen without her mask of raven feathers.

Helga’s career as a bandit began when she was a young woman. She was a talented and fearless thief and soon developed a reputation as an incredibly skilled and daring robber. After a few years of successful thefts, she decided to take her skills to the sea and began to specialize in raiding merchant ships. Through her mastery of stealth tactics, she and her band of bandits quickly became feared throughout the region as pirates and robbers. Helga is rarely seen without her signature mask of raven feathers, a symbol of her power, and her reputation continues to grow each day.

A powerful mage, Krell leads a band of bandits who specialize in magical robberies. He is a master of illusion and manipulation, and always seems to know what people are thinking.

A former gladiator, Merrik now leads a band of bandits who specialize in ambushing travelers in desolate areas. He is a master of the spear and shield, and is rarely seen without his helmet of black steel.

Unlock Your Adventure: Free Tavern Description and NPCs with Backstories