Did Leather Armor ever exist as shown in D&D?

Leather armor is a common sight in fantasy games as well as thoughout the history or Dungeons and Dragons 5e. But, did 5e leather armor as we think of it even exist in history? This topic is highly debated even among arms and armor historians. Many of the most comprehensive works on Medieval Europeans armors ignore the topic all together, because it’s so inflammatory and open to interpretation.

That said, there are a few extant pieces of hardened leather armors which we have available to us. The most famous of which is likely the leather "rerebrace" (upper arm armor, between the elbow and shoulder defenses) from the British Museum. These date somewhere between the early to middle 14th century and are most likely English in origin. 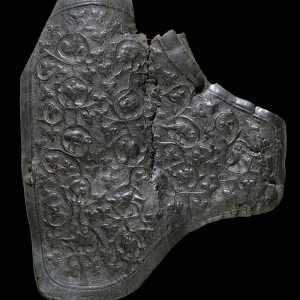 One of the major arguments with leather armor surrounds the extent to which it was used. We have very few pieces of armor still in existence to examine, and often historians look to effigies created for militaristic nobility. The problem therein is discerning whether what we’re looking at is leather or some other, usually ferric, metal. This is where the debates usually take place. Leather has the fantastic quality of being thicker than metal, and allows it to be carved with intricate designs. There are a handful of effigies that illustrate ornately carved pieces that could very likely have been made of leather, but also could have been created with layers of thin brass or similar ornate materials.

Take a look at the knee protection on the effigy of Sir William de Fitzgerald from 1323. Notice how, compared to the rest of the harness he’s wearing the knees are fantastically ornate? Even the rondels protecting his armpits, while also ornate, pale in comparison.

Similarly, check out the entire leg portion on this knight from a 13th century Italian illustration In Charles Ffoulkes’ book Armour and Weapons. 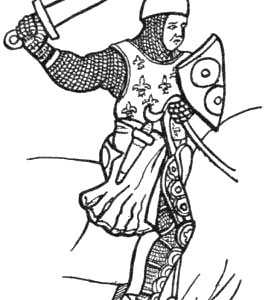 Brian Price, in his book Techniques of Medieval Armour Reproduction: The 14th Century, points out a handful of literary excerpts that discuss the subject as well. Chaucer’s Sir Thopas has the line "His Iambeaux (meaning arms) were of quyrboily." Price also mentions other, but I don’t have them in front of me and wouldn’t want to misquote them.

Brian Price also speculates to the commonality of stand-alone, hardened leather armor. He feels that it was much more common than illustrations and extant pieces would lead us to believe. The cost and availability of leather, in addition to the ease with which it’s created, makes him believe that it would be a standard choice for a less wealthy soldier or knight during the late medieval period. There’s some validity there, I believe, but speculation is not worth delving into. The first D&D module ever published