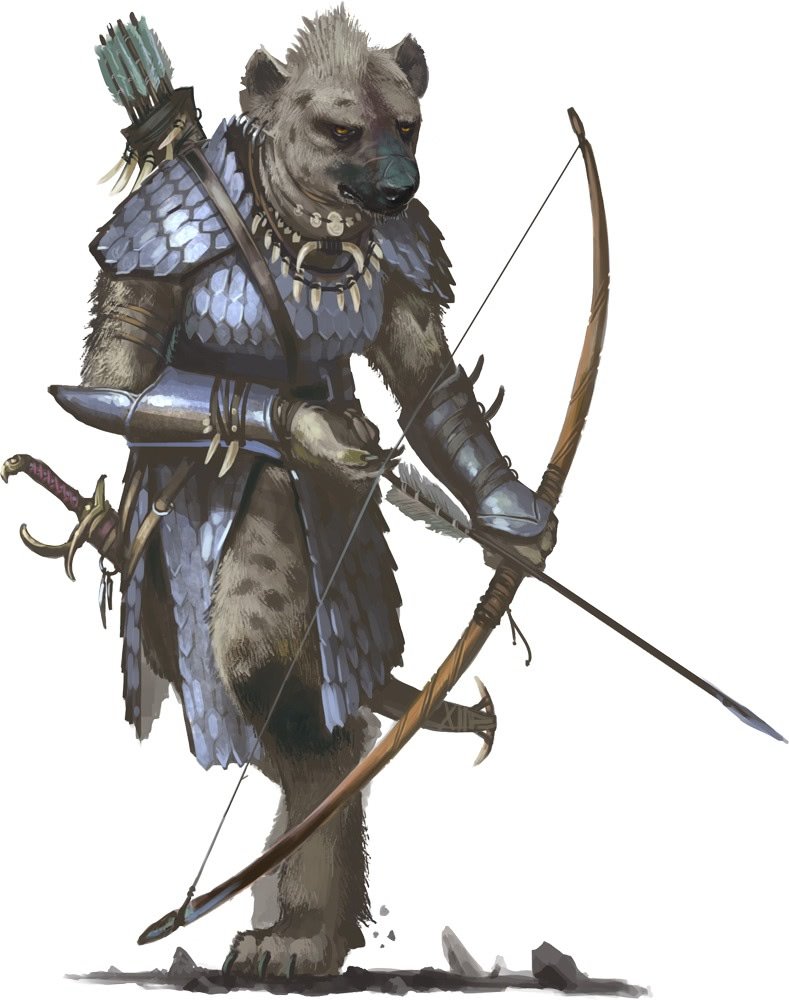 The gnolls of Ban Tuur weren’t always the savage humanoids they are today. Centuries ago, the demonic energy that began leaking into the Prime Material Plane from Nullbark Isle slowly transformed the wild hyenas of the steppes into what are known as gnolls. Now, most worship the volcano Tuur, who they believe to be an aspect of Yeenoghu, and have pushed the last of the humans east past the mountains. While the majority of the Ban Tuur gnolls worship the volcano, a handful of the earlier gnolls traveled east and have small villages set up between the kingdoms of the Eastern Sanction. These more peaceful gnolls are often easier to distinguish from their savage brethren due to the somewhat higher emphasis on hygiene they have.

Rarely showing compassion, Ban Tuur gnolls roam the steppes in search of any living thing which they can devour. From a distance, they lurk and stalk potential prey before they swarm and overrun the victims in a tide of chaotic primitivism. Because this mentality is seen as a requirement for survival, gnoll packs, especially priests of Yeenoghu, do not tolerate compassion; especially if that compassion costs the pack a hefty meal. Such individuals are often consumed by the pack and reanimated as a witherling, forced back into Yeenoghu’s service. Others flee soon after they become self-aware of their situation and attempt to make peace with the humans to the east or live as long as possible as a loner. These deserters are usually welcomed into a gnoll village in the Eastern Sanction and receive aid to better integrate into society and make up for any of their past crimes, sometimes acting as spies to deliver intel about the gnoll warbands to the humans of Haldrim.

Why Become an Adventurer?

Most gnolls would not survive on their own; separation from the pack means you must fend for yourself. When considering the gnoll for your character’s race, ask yourself the following questions: Why is this gnoll away from their pack and how did they get in that situation? How have they survived this far before the adventure began? How do they feel about non-gnolls; are they a compassionate misfit or do they hold back every urge to eat each infant on site?

Age. Gnolls reach adulthood by the age of 8 and can live up to about a century, though most rarely see their 20’s.

Alignment. Gnolls are usually chaotic or neutral evil, though exceptions exist. These outliers either flee their tribe and attempt to assimilate into civilization or are feasted upon by their brethren at the first sign of compassion being shown.

Size. Gnolls range in height from over 6 feet tall to 7 1/2 feet and weigh upwards of 280 pounds. Your size is Medium.

Speed. Your base walking speed is 30 feet.

Bite. Your jaws are natural weapons, which you can use to make unarmed strikes. If you hit with this bite attack, you deal piercing damage equal to 1d4 + your Strength modifier instead of bludgeoning damage normal for an unarmed strike.

Rampage. When you reduce a creature to 0 hit points with a melee attack on your turn, you may use a bonus action to move up to half your speed and make an attack with your Bite trait.

Having a chuckle with the lads. Hyenas tend to be wherever Gnolls are and often become domesticated by their tribes to be used as guard “dogs”, hunting companions, and, in the case of Giant Hyenas, mounts and beasts of burden. Because of this relationship, through sounds and gestures, you can communicate simple ideas with hyenas.

Languages. You can speak, read, and write Common and Gnoll. The Gnoll language is incredibly difficult for non-Gnolls to understand as it primarily consists of yips, yaps, chuckles, and snarls with some references and influences from the Abyssal language.

Subraces. There are 3 subraces of gnoll that exist: Striped, Spotted, and Brown.

Striped Gnolls tend to be shorter than most gnolls but are capable of amazing bursts of speed. Often earning the rank of “Flesh Gnawer”, specimens of this breed of Gnoll tend to be the most ruthless and apathetic of their kind.

Sudden Rush. Your feral adrenaline can give you a surge of energy. Once per turn, when you use your Action to take the Dash action, you can increase your movement speed by 60 feet instead of the normal amount.

Natural Agility. You are proficient in your choice of either the Acrobatics or Stealth skills.

Incite Rampage. Born to be a leader, you can command your allies to strike when you see fit. As an action or by substituting one of your attacks when you take the Attack action on your turn, you can allow a friendly creature within 30 feet of you that can see and hear you to use their reaction and make one weapon attack against a creature within 5 feet of them. Once you have used this ability, you must finish a short or long rest before you can use it again.

Keep the Runts in Line. You are proficient in your choice of either the Intimidation or Persuasion skills.

Brown Gnolls are the most common Gnolls and make up the bulk of a tribe’s forces. Often treated poorly by higher ranks, Brown Gnolls survive off of whatever scraps or refuse they are able to eat. The weakest among them are left to tend to the tribe’s pet hyenas; those who shirk their duties usually become grub for said hyenas.

Serrated and Gnarled Teeth. Your jagged and vicious teeth can hinder the recovery and movement of your foes. When you hit a creature with your bite attack, you can force that creature to make a Constitution saving throw. If it fails, for the next hour, their speed is reduced by 10 feet and any hit points it recovers within are halved. Once you use this feature you cannot use it again until you finish a short or long rest.

Among the Dregs. You are proficient in your choice of either the Survival or Animal Handling skills.