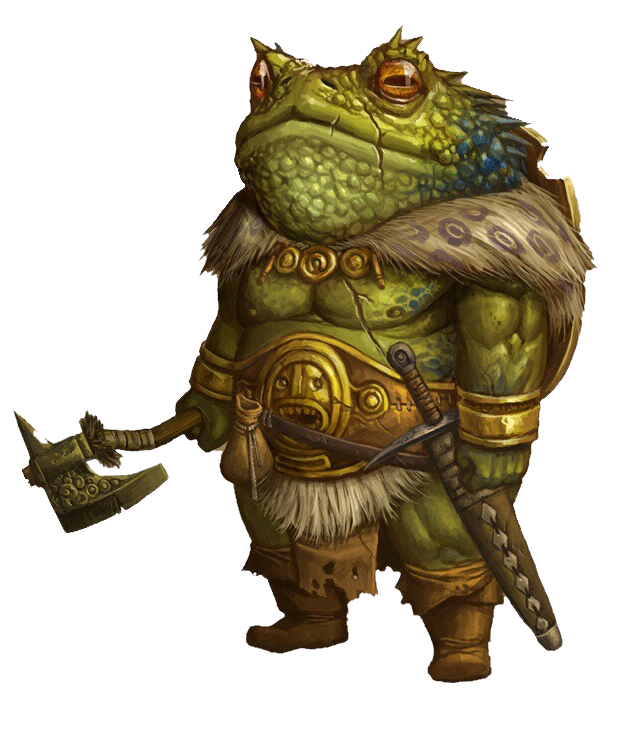 Through only their own initiative, Bullywugs claim to be the rulers of any and all swampy regions. While they don’t have a complex social structure, most of them certainly act as if they were part of one; giving themselves extravagant titles, excessively bowing and pleading for the acknowledgement of those above them. While the dwarves of Korim keep to themselves for the most part, on occasion they must venture into the swamps of Lako’Watum for resources and sport. Whenever a band of Korimites enter the swampy region, it is rare for the bullywugs to not notice their intrusion and take action accordingly.

The Talk Around the Pond

Bullywugs possess a unique ability to communicate with all manor of frog and toad-like creature, even over vast distances. Croaking in this manner can allow for information such as intruders, a cache of resources, or a previously undiscovered plot of land to expand upon to be quickly spread across a tribe’s area of influence.

Why Become an Adventurer?

Why did your bullywug leave the swamps of Lako’Watum? Perhaps they were taken prisoner by a band of Korimite dwarves and are now a slave to them? Maybe you were sent out as an ambassador of good faith for your tribe to the people of Cardus? Or maybe you simply got bored of being at the bottom of the food chain and set off to start your own following to rule over? These qualities can help tremendously when roleplaying a bullywug adventurer.

Age. Bullywugs reach maturity in their early teens and can live up to a century.

Alignment. Many bullywugs can be ruthless and cruel which lends them to Evil. Their indifference toward law or chaos brings them closer to Neutral. The most “outspoken” of their kind fit this trend, but a noticeable amount of tribes closer to civilization’s borders are less likely to be evil.

Size. Bullywugs stand between 4 and 7 feet tall and weigh anywhere from 100 to 300 pounds. Your size is Medium.

Speed. Your base walking speed is 30 feet. You also have a swimming speed of 30 feet.

One with the Swamp. You have advantage on Dexterity (Stealth) checks made to hide in swampy terrain. You also ignore difficult terrain caused by mud and other swampy elements.

Bite. Your froggish maw is a natural weapon, which you can use to make unarmed strikes. If you hit with it, you deal piercing damage equal to 1d4 + your Strength modifier, instead of bludgeoning damage normal for an unarmed strike.

Amphibious. You can breathe both air and water.

Speak with Frogs and Toads. You can communicate simple ideas to frogs and toads, as well as their giant counterparts and any other frog-like creatures.

Languages. You can speak, read, and write Common and Bullywug. The Bullywug language is that of frogs and toads and consists of croaks, gurgles, and obnoxious screeches.