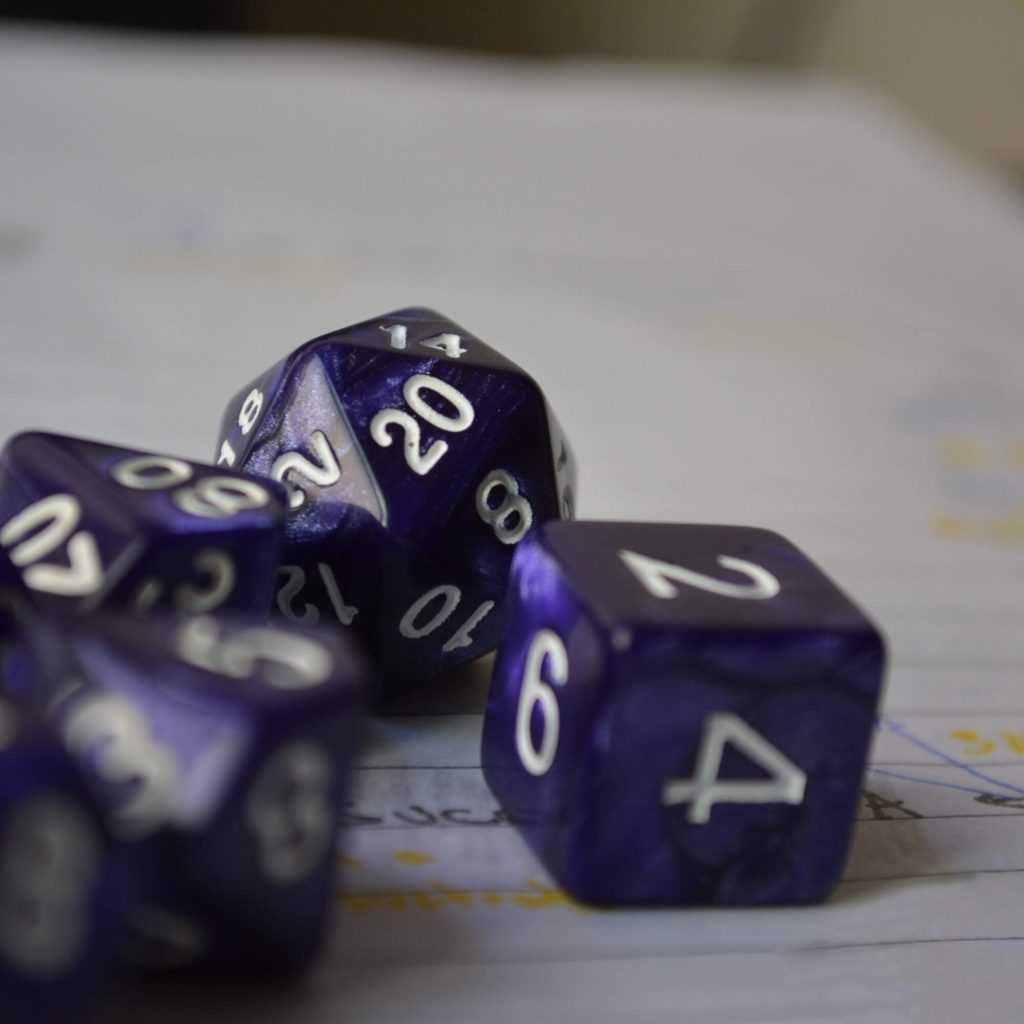 The Ultimate Guide to D&D Dice

Whether you’ve known about it since were a kid or only heard about it for the first time recently from an episode of Stranger Things, Dungeons and Dragons (D&D) has been a cultural phenomenon since it was first published in the 1970s.

One of the most important objects that players use during gameplay is their set of dice. Whenever a player chooses to take an action with an uncertain outcome, a roll of the dice will decide what happens in the game.

D&D dice sets come with seven dice, all of which have a different number of sides. The dice are denoted by the letter “D” and the number of sides the dice has. For example, the typical 6-side die that most people are familiar with is called a D6. The other dice a Dungeons & Dragons set includes are the D20, D12, D10, D8, and D4. D&D dice sets will also usually come with a percentage die, which is like a D10 but the numbers on it are 0, 10, 20, and so on, rather than the single digits on a regular D10. 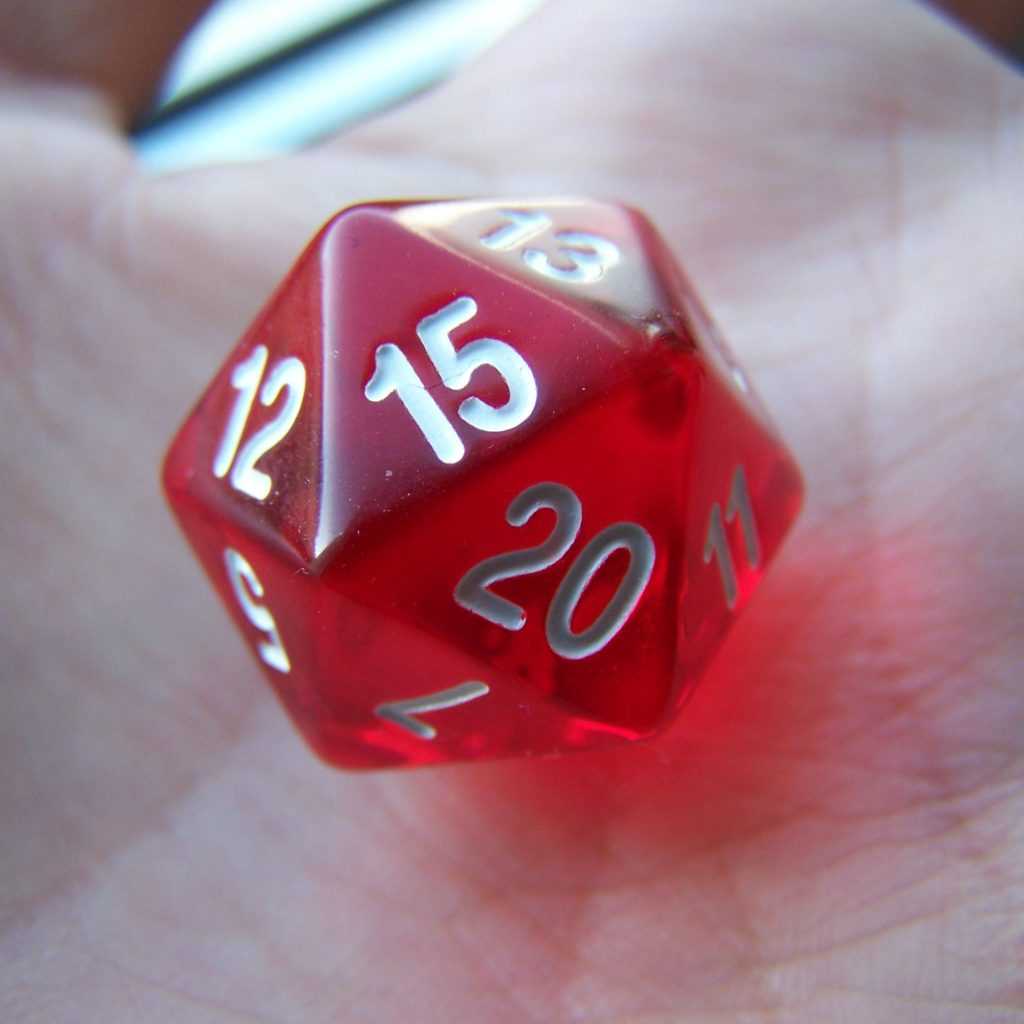 The D20 is the signature die in D&D. In combat, it determines the initiative order in which the players can attack, as well as how effective their attacks are. D20s are also used to determine if a player is skilled enough to take a certain action or if they’re successful in reducing the damage of an attack on themselves. 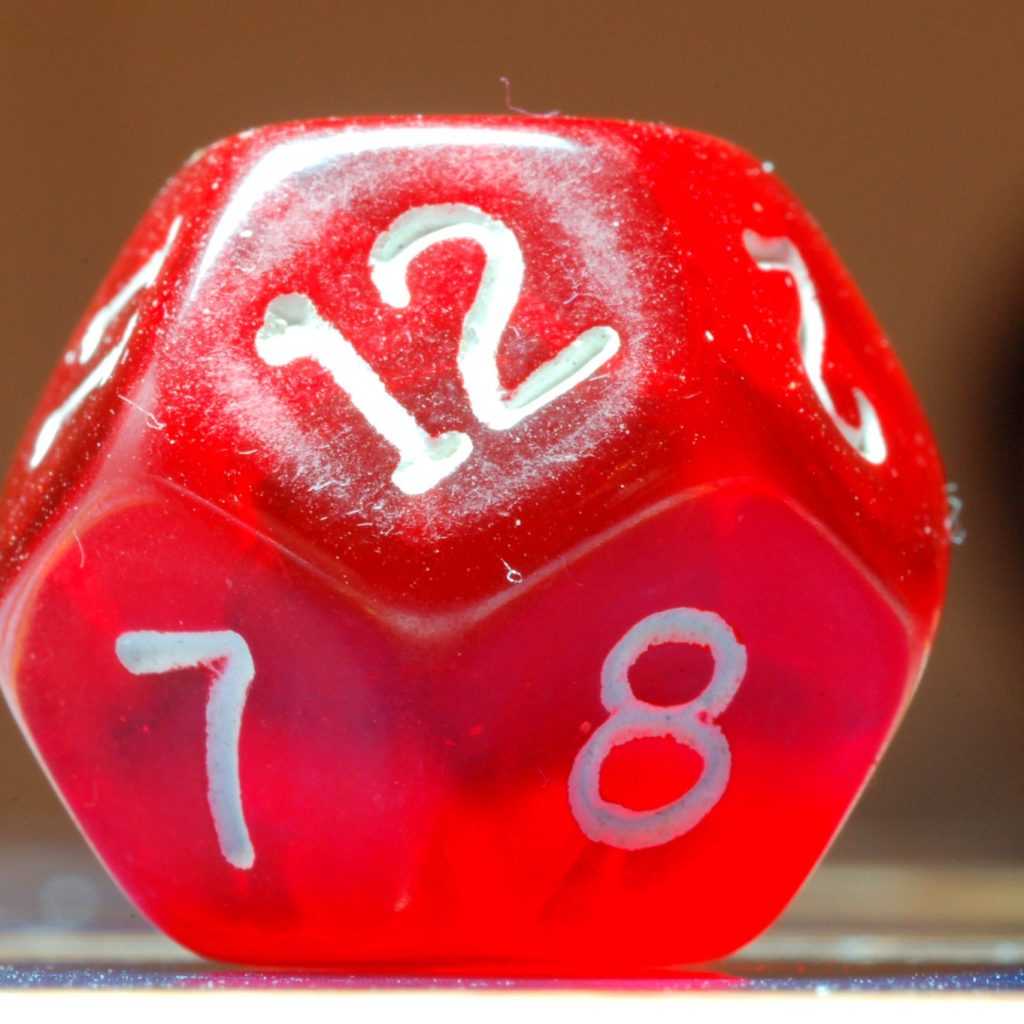 D12s aren’t as common as some of the other dice in D&D. The D12 is usually to determine the damage caused in a battle. If your weapon is strong enough, it might be able to do up to 12 points of damage. The Two-handed Greataxe uses a D12 for damage. 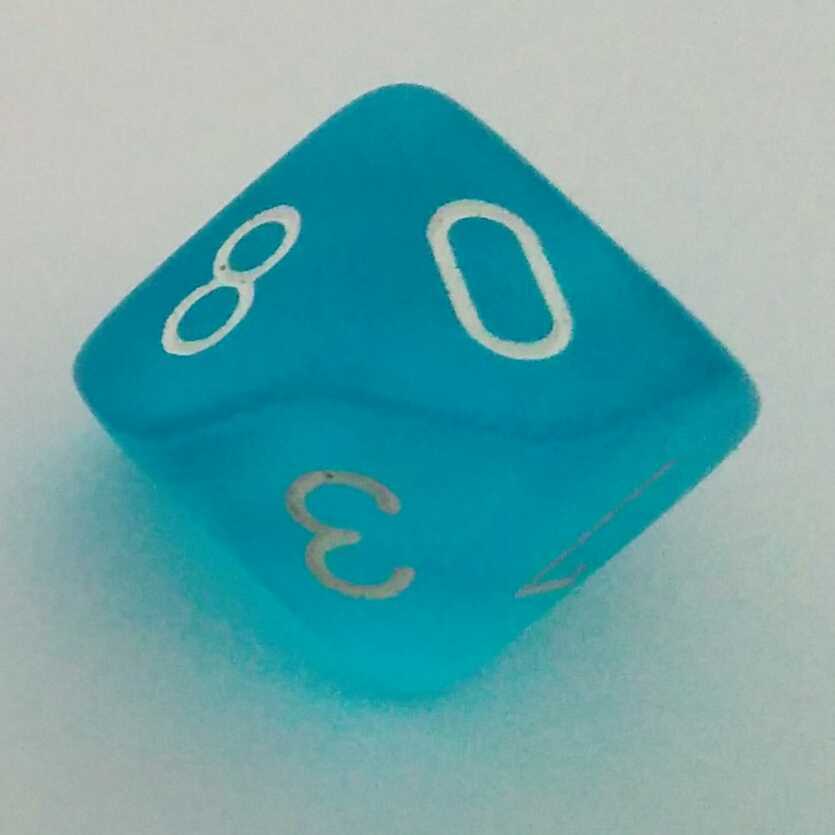 The D10 is mostly used to determine damage. Some weapons can be wielded two handed and get to roll D10 for damage. It’s also used in conjunction with the percentage die whenever the dungeon master asks you to roll to find out the percentage chance of something happening. To do so, you roll both D10s and add their values together. For example, if you roll two D10 and the first is an 8 and the second is a 3, you would have rolled an 83%. The D8 is used often to determine damage, as more weapons and spells are able to cause a maximum of 8 damage than 10 or 12. This includes the most commonly used one-handed weapons, like longswords and flails, that allow the player to wield a shield in their second hand. 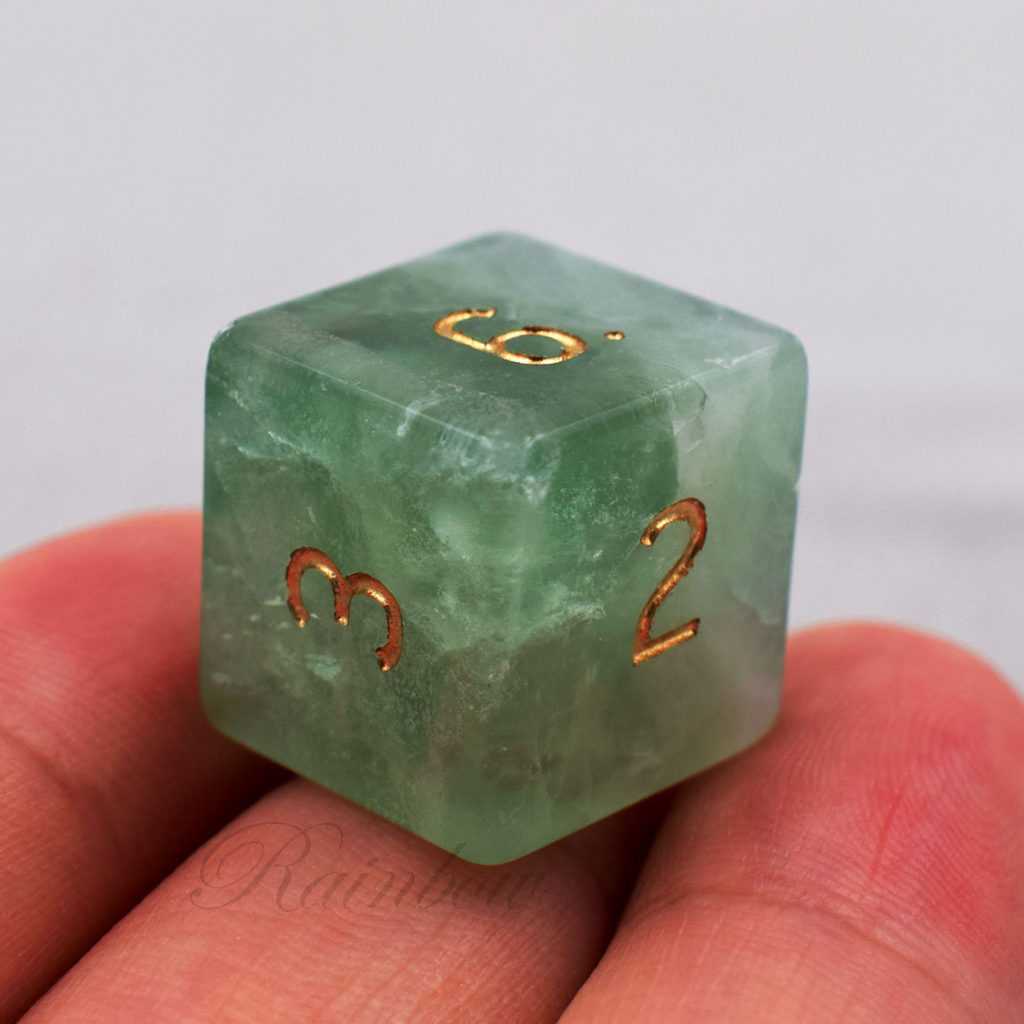 The D6 looks like a typical die, but it has numbers on each side instead of the dots you might see on a die used for most board games. The D6 is also quite common for determining the damage done by spells and weapons. 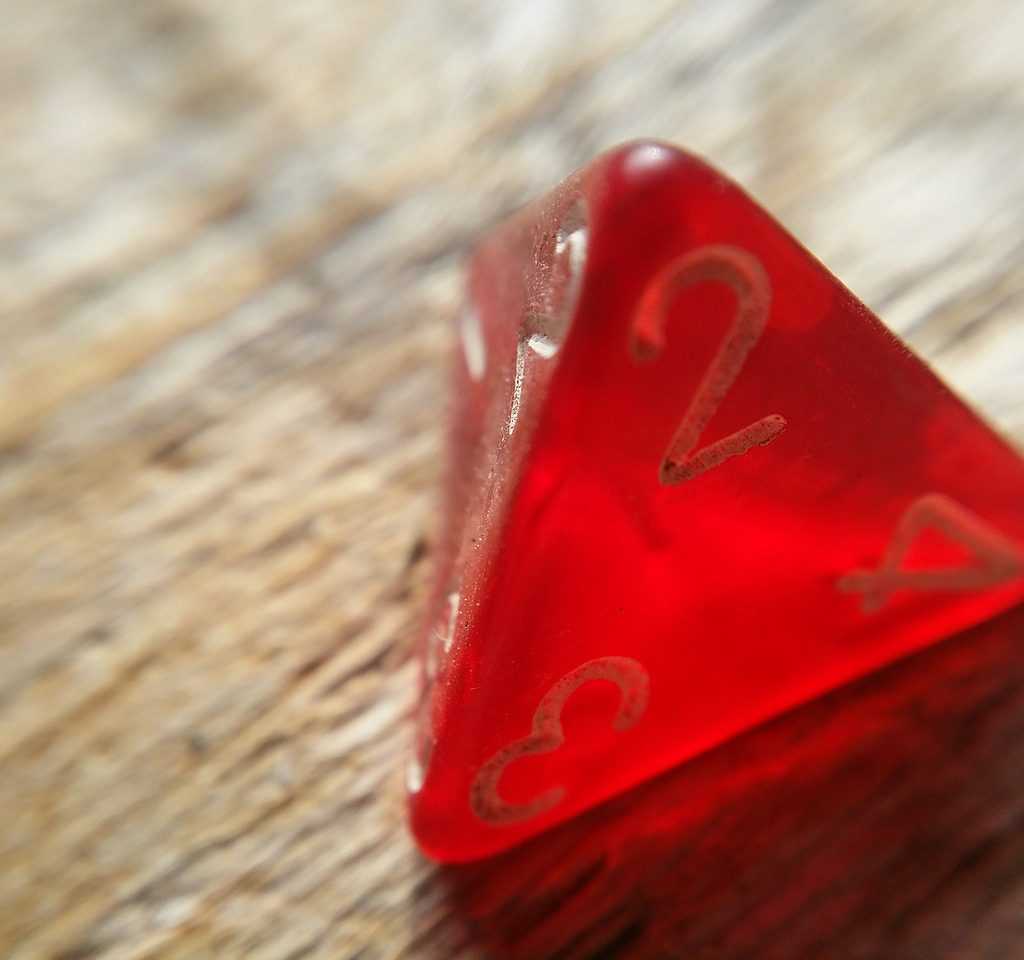 The D4 determines damage for the smallest weapons used in D&D. Daggers and some lower-level spells roll the D4 for damage. It’s an unusual-looking die, shaped like a pyramid, with multiple numbers on each side. The number determined by the roll is the one that’s upright.

Many players enjoy collecting beautiful, interesting dice, and some will have multiple sets they covet. D&D dice sets come in many different styles and materials, including plastic, metal, and some other unusual, custom materials. There are several considerations that a player might want to think about before choosing what type of dice to buy.

Metal dice are several times heavier than plastic dice, making for a more substantial and satisfying roll. They roll around less once they’ve made contact with your playing surface. Metal is also more durable than plastic dice. Another advantage is that metal dice is more likely to be random (and therefore fair) due to the fact that plastic dice can be made uneven during the manufacturing process.

However, there are also pluses to plastic dice: they are cheaper than metal dice and some people might prefer the lighter weight. Plastic dice can have a wide range of colors and blends and can even be translucent.

To keep your dice in as good condition as possible, players have a few different storage options. Most dice sets will come in small drawstring bags that are perfectly suitable for storage. However, this might become a problem if you have multiple sets of dice, as you’ll have a collection of many small bags without an obvious way to distinguish between them.

That’s where other options like bags with pockets, boxes and trays come in. Although you can just throw your dice into a fishing tackle box, divided bead container or just a tupperware box, sometimes you want to make a statement when you pull out your dice. There are many beautiful, handmade wood and custom plastic dice storage available online. 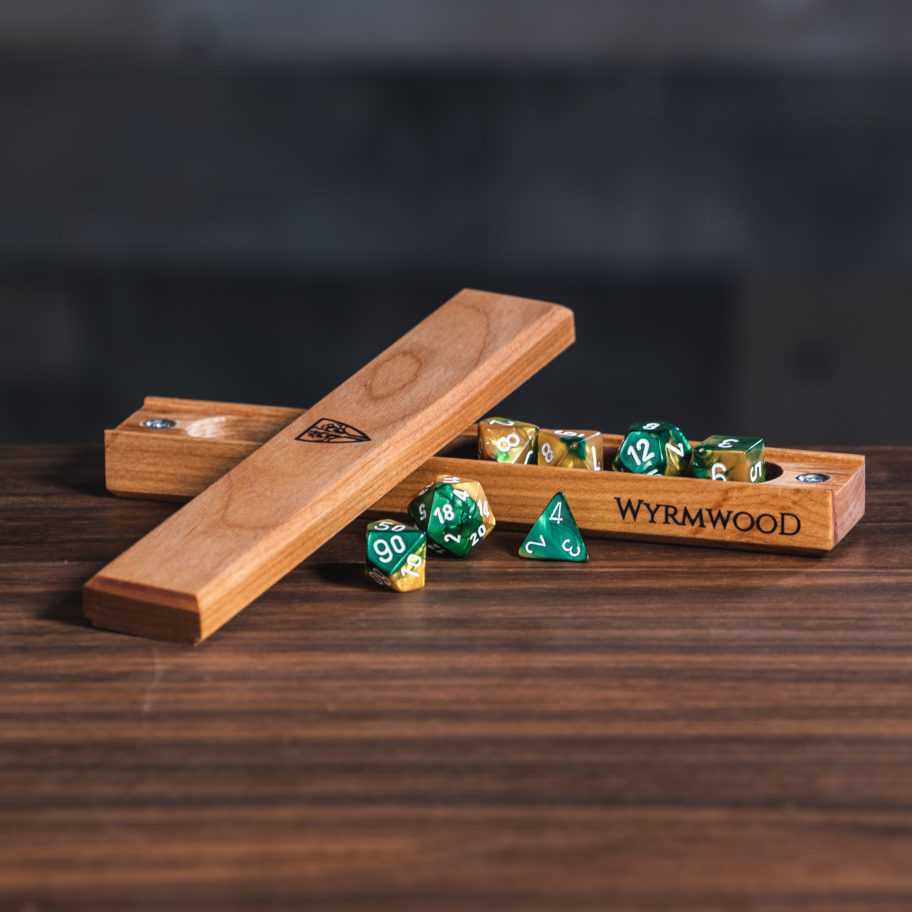 Many things have changed since the publication of D&D in 1974. Technology has developed significantly, and in some ways, it’s affected the game. One of these ways is that, if they so choose, players might not even have to buy D&D dice at all. Instead, they could opt to use online dice rollers, which are random number generators that have the same outcomes as the D&D dice do. With these rollers, which are available for free from many different websites, a player can skip actually rolling a D10 and instead click “roll” on an online D10 to get their result. But many players like the tangible feeling of throwing their dice to see what happens next to the character that they’ve become so attached too.

Check out our own Dice Roller

Taking Care of Your Dice

Like anything you want to keep in good condition, it’s important to take good care of your dice. Metal dice, in particular, need more care than plastic. They should be stored in a dry, soft, padded container. Avoid keeping them with plastic dice, as the metal can scratch and damage the plastic. In fact, it’s best to store metal dice in a way that their movement is restricted, so that they cannot scratch each other, either.

To extend their life, metal dice can be rolled on special surfaces designed specifically to protect the dice. (Or just on something soft, like carpet, is fine.)

For both plastic and metal dice, wiping them regularly with a soft cloth will keep them clean and free of oil and dust. For special cleaning, soap and water is just fine. 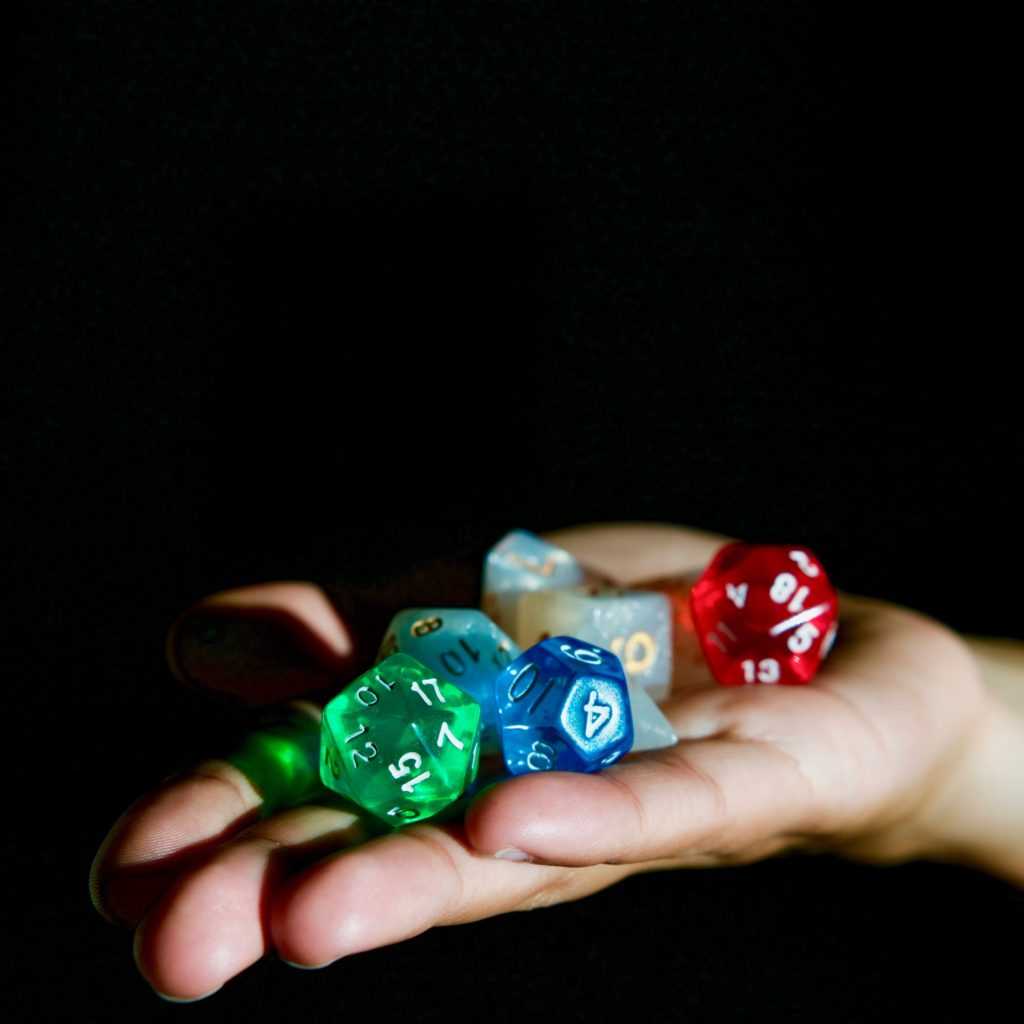 How to Start Collecting Dice

If you’re really into D&D, or dice in particular, you might want to start building a collection of dice sets to use for playing or even just admiring. To start collecting, look into D&D dice retailers.

Just browse their selections and choose the sets that speak to you the most. You can choose colors that match your characters to start out with. Try getting one metal and one plastic set to see which you prefer. Then, as you look to grow your collection, you can move onto trying specialty materials, like wood, brass, and titanium. It can become an addicting hobby collecting dice and bringing out your latest set to your next gaming session. Have fun! 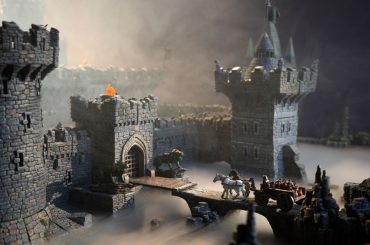 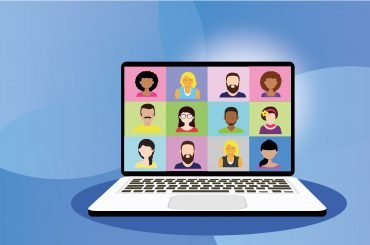